If you have ever been on a Dropstone trip, then you’ve met Corlene.

You’ve seen her beautiful house and immaculately landscaped garden and eaten her delicious meals. Corlene’s food, home, and indomitable spirit are cornerstones in the Dropstone world.  Corlene is a class act, and I got a chance to catch up with her last week to learn more about the woman behind the myth, legend and brilliance.

Corlene grew up in Choteau.  Like many small town kids, she couldn’t wait to get out. And get out she did.  In true wanderlust fashion, Corlene lived in many places in the west once she left Choteau including San Francisco, Spokane, Alaska, and Seattle.  In one six year period, she moved 18 times.  She held a variety of jobs and has always been easy going, flexible, and capable of almost any task.

Once back in Choteau, she worked a variety of jobs at many local businesses and non-profits including the Old Trail Museum, the Abstract office, a few working and guest ranches, several different outfitters, the Montana Wilderness Association, and the Sonoran Institute. She then “retired” (although all of us that know Corlene know she will never truly retire – she is always helping someone figure out how to decorate their house or volunteering for a local organization or re-landscaping her garden).  It was in 2015 that we started working with Corlene, and we are beyond grateful for the huge roll she plays in making our trips successful and tasty.

Corlene has spent more than her fair share of time in the mountains as well. She cooked in the wilderness for 35 years, starting in her mid 20’s.  Some years it was for just a few trips a season, and other years, she would cook for the entire season.  During her tenure as a camp cook, she worked for 8 different outfitters, and all but one of them operated in the Bob Marshall Wilderness. 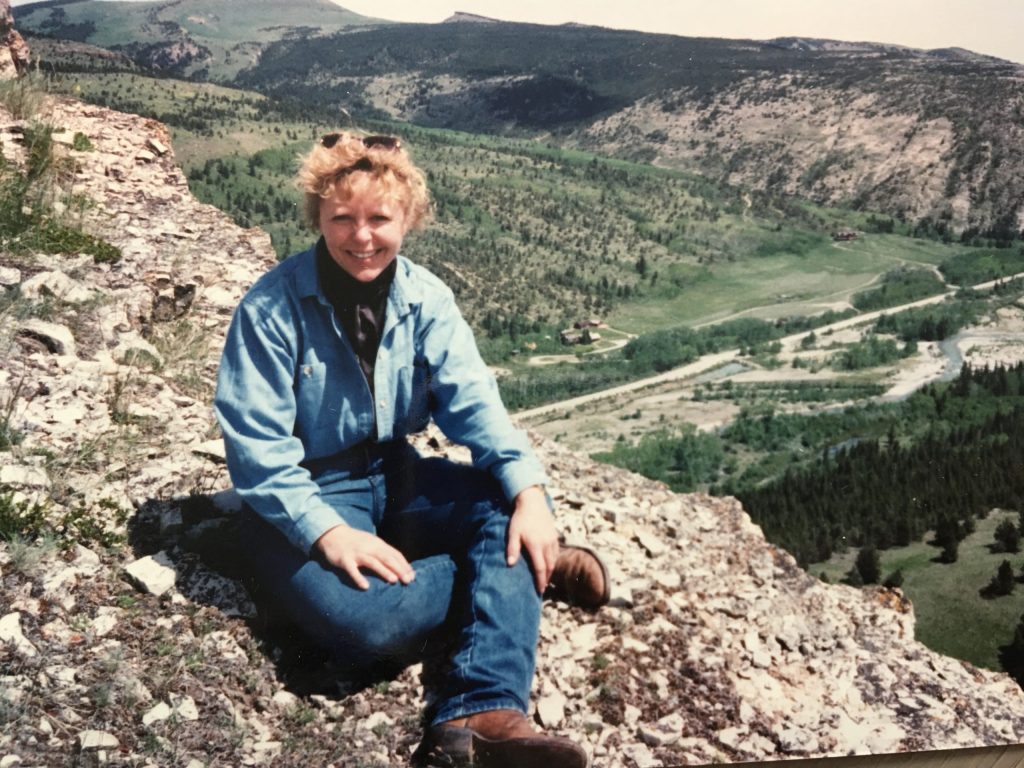 The first outfitter she worked for was her friend Chip Gollehon.  On those trips, she learned how to cook in the backcountry from Chip’s mom, Janette.  When she started, she would never have thought of herself as a cook. Her mom was a good cook, but she didn’t want to do things she considered “girl stuff” back then including typing and cooking. But she soon realized that it’s one thing she could always do in the mountains and someone is always looking for a good backcountry cook. For her, cooking in the backcountry went hand in hand with wanting the wilderness experience. Plus, working for different outfitters allowed her to experience different areas in the Bob.

While Corlene never had any formal training on horseback, she started riding in first grade with her friend Leslie Gollehon. Once she became a backcountry cook, she was often in charge of leading the guests from one location to the next.  She remembers once that the person she was working for had drawn the directions to the next camp on her lunch bag – she just had to make sure the guests didn’t see her peaking at the brown paper bag for directions.  While she had many adventures via horseback including people falling off or horses getting turned around, it somehow always worked out.

Her favorite place in the Bob is the Trilobites because of all the “mop head” anemones that bloom there. She admits she was never big on remembering the names of mountains or drainages, but she could remember which hillside would have her favorite flowers and when they would bloom.  She was more into the “micro” wilderness experience than the “macro” world. Or as she said, “Don’t get me off the trail.”

She worked in the Bob in 1988 and remembers valleys choked full of smoke and reroutes on several trips due to trail closures.  She remembers riding out of hunting camp on several occasions in belly deep snow. Or trips that had days of rain, where it was hard to get dry and the horses would slide down the trail in the mud. While inclement weather and events are not always pleasant, they are part of the experience. She says, “When you go back in the mountains, you have to be prepared for what the mountains dish out at you.  In the end, some of the best stories are from adverse conditions.” 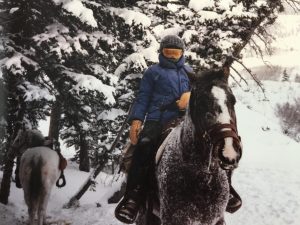 She has seen an evolution in backcountry cooking as well. She remembers once bringing in a whole chicken to cook. She knew how to cook it but didn’t know how to cut it up, so the outfitter she was working for had to show her how.  She remembers when a lot of the cooking gear was composed of the old and worn out pots and pans from the lodges and homes of the outfitters, some partially broken or ill equipped to be used on a wood stove. This added another elements of finesse needed to cook a good meal in the mountains. Over time, cooking has evolved and become easier as gear and menus have changed.

One of her favorite parts about cooking in the mountains or for Dropstone is doing the organizing and planning of food and thinking about the ease of cooking it in the backcountry.  She prefers to do her own menu but has cooked for operations where they would also supply the menu too. One pointer she shared was to never use Dream Whip in eggs if you run out of cheese or dairy.  A lesson learned the hard way.

Working for Dropstone is perfect timing for Corlene.  While she loved working in the wilderness, she now prefers the comforts of home, a stove with a thermometer, indoor plumbing, Pandora, and air conditioning.  When I asked her which Dropstone meals she liked the most, she said (in true Corlene fashion) that she likes all of them. Especially Chicken Marbella and the Pork Loin with mustard sauce. Spaghetti is one of the favorites too. Flavors are important and she is now cooking more exotic than meals she used to cook. She likes to cook new and different things.  She used to not like to cook for vegetarians, but now she is looking at it as an opportunity to try new food.

Corlene has always as she says “apparently been an entertainer”.  The first thing she did when she moved back was to buy 20 metal garden chairs. She loves having gatherings at her house. She loves having people over. People show up, she gets to cook, she has the whole house to herself to prepare beforehand, she knows what her timeline is and it gives her a reason to clean her house/mow lawn.  People show up for a couple hours, have a really good time and then so long. 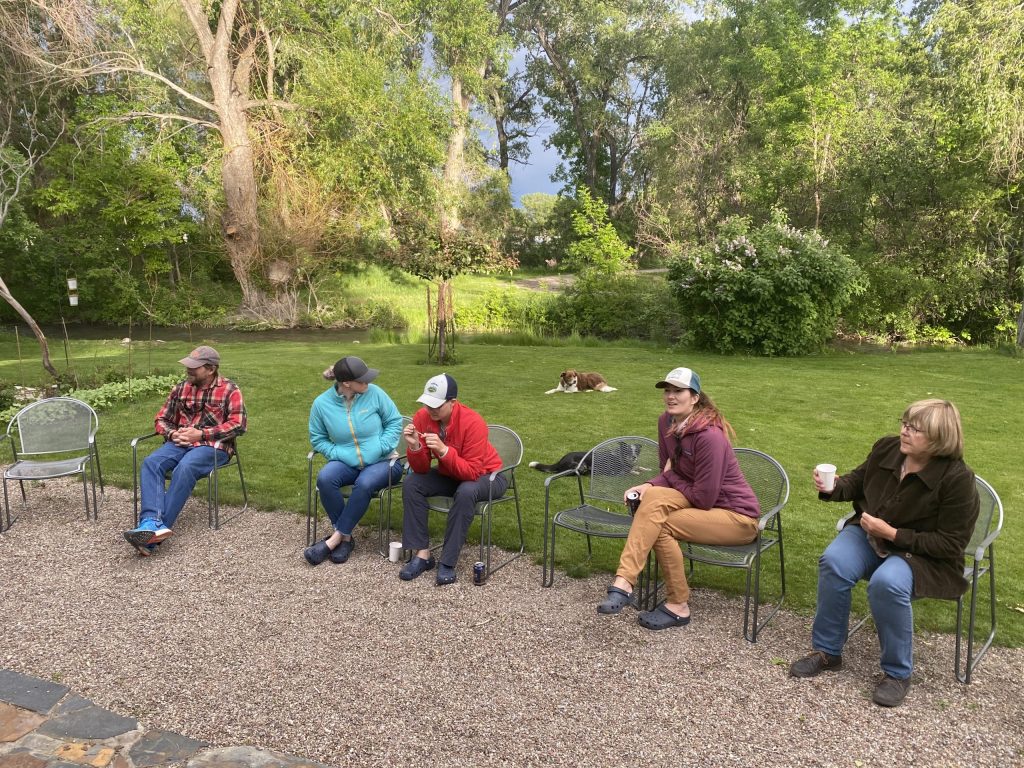 For us, it is a great way to start each trip – her house has a wonderful relaxed vibe and her meals are delicious! For us, Corlene has been a real game changer and an integral part to making each trip experience fun and memorable.  She’s also been a great advisor to us and her flexible, easy going nature have often been a good reminder for us to not get too up tight. Thanks Corlene! 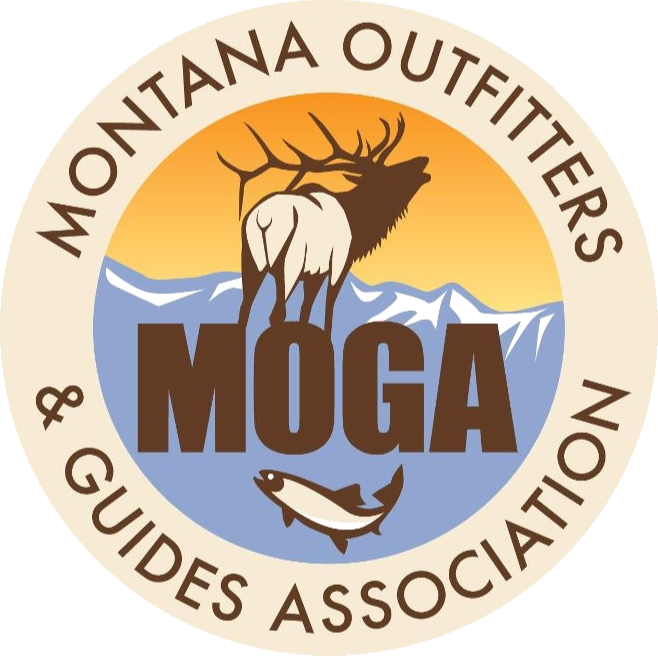